I have been crocheting for nearly 60 years and yet there is always something new to learn or try - don't you just love it?
When I retired the nice people  I had worked with for so long bought me a book called 'Crochet Master Class' by Jean Leinhausser and Rita Weiss. I have been wanting to try some of the techniques ever since and finally:
The most exciting is called overlay crochet I have googled the technique and gazed in admiration at some of the most beautiful pieces, one of which was connected to a pattern by Lilla Bjorn which I bought immediately.
It has taken a long time to finish but I am pleased with the result (maybe not the colours) 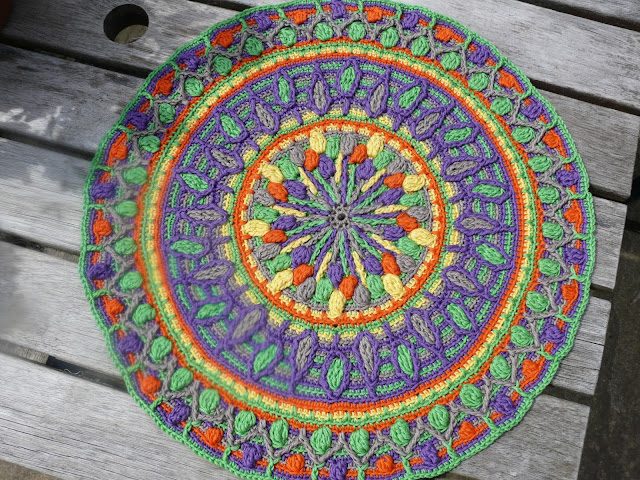 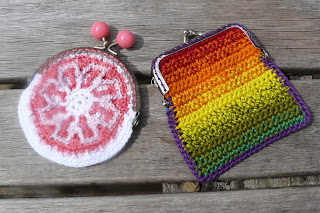 The pink purse is also made using the overlay technique but the rainbow purse is made using the painted crochet method. Here you start with three strands of one colour and then drop one strand and introduce a strand of the next colour etc. It gives a nice gradual transition between the colours. 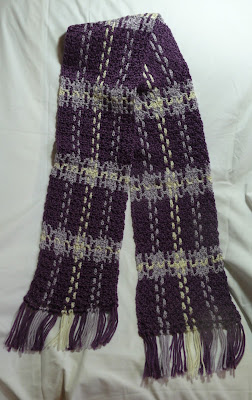 This scarf is made using what I call woven crochet. We have had a few requests to explain how to do it so here is a brief tutorial.
I used double knitting and a 3.5 mm hook but it is really not critical.

The basis is a crochet mesh made from chains, trebles and slip stitches. The foundation chain needs to be an even number of stitches and the dotted line is just to indicate that you can make it wider by increasing the number of chains.

Make a chain and even number of stitches long.
( for the mathematical among you the chain length is 2x + 6 where x is any whole number )

The rest of the foundation mesh is just repeating row 3 until the piece is as long as you want it and changing colour to make your pattern. It is worth experimenting but this one is 6 rows of navy blue, 2 rows of purple one row of red, two rows of purple and finally 6 rows of blue again. 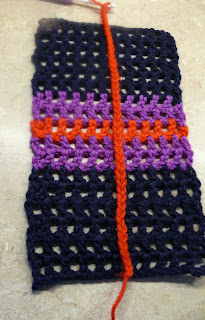 Make a chain that is a bit longer than the work but don't fasten off.
Leave a long end at the start of the chain. The number of chains you will need is roughly two times the number of rows but this will vary according to the tension of your work. 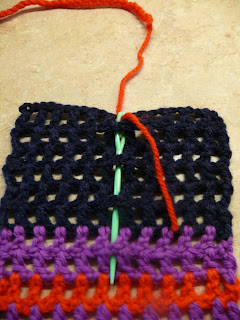 Weave the chain in and out of your foundation mesh - it is best (but not essential) to start in the middle to get a balanced pattern. 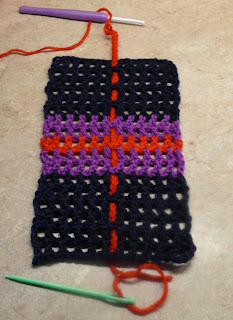 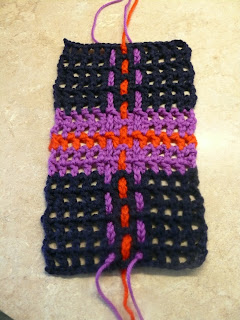 The next chain is woven through the mesh but it goes over where the other one went under -  it is easier o look at the picture. 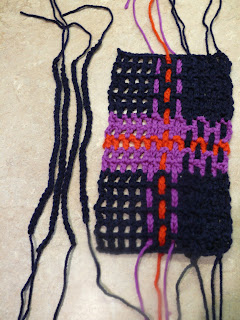 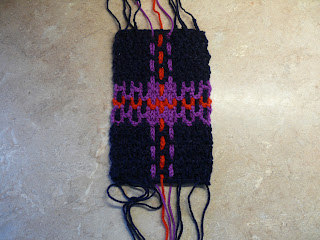 Weaving finished. To finish use the long ends to anchor the chain to the mesh. I found it easier to fold the end around the bottom/top edge of the mesh and then sew it to the chain of the same colour. This means that you are always sewing the end to its own colour which looks nicer. You can also add a fringe if in the bottom/top row of holes.

Experiment to see what happens and if you do we would love to see the results.


If there is anything which is not clear please let us know. I am now off to try some more patterns - lots of colours I think rather than just three.
Lynn
Posted by String Theory Crochet at 09:29