Vicky, Graham and I went to the Farnborough Knit and Stitch and Make it show last Friday. By far the greatest emphasis was on making cards so we may book a stall next year to increase the amount of knit and stitch! There was , however, plenty to inspire me , Vicky loved the gadgets on show like an automatic wire twister and Graham was interested in material for making patchwork and storage methods. As a result of my inspiration, for a large part of the last week I have been trying to make crochet buttons. The photographs show my progress: 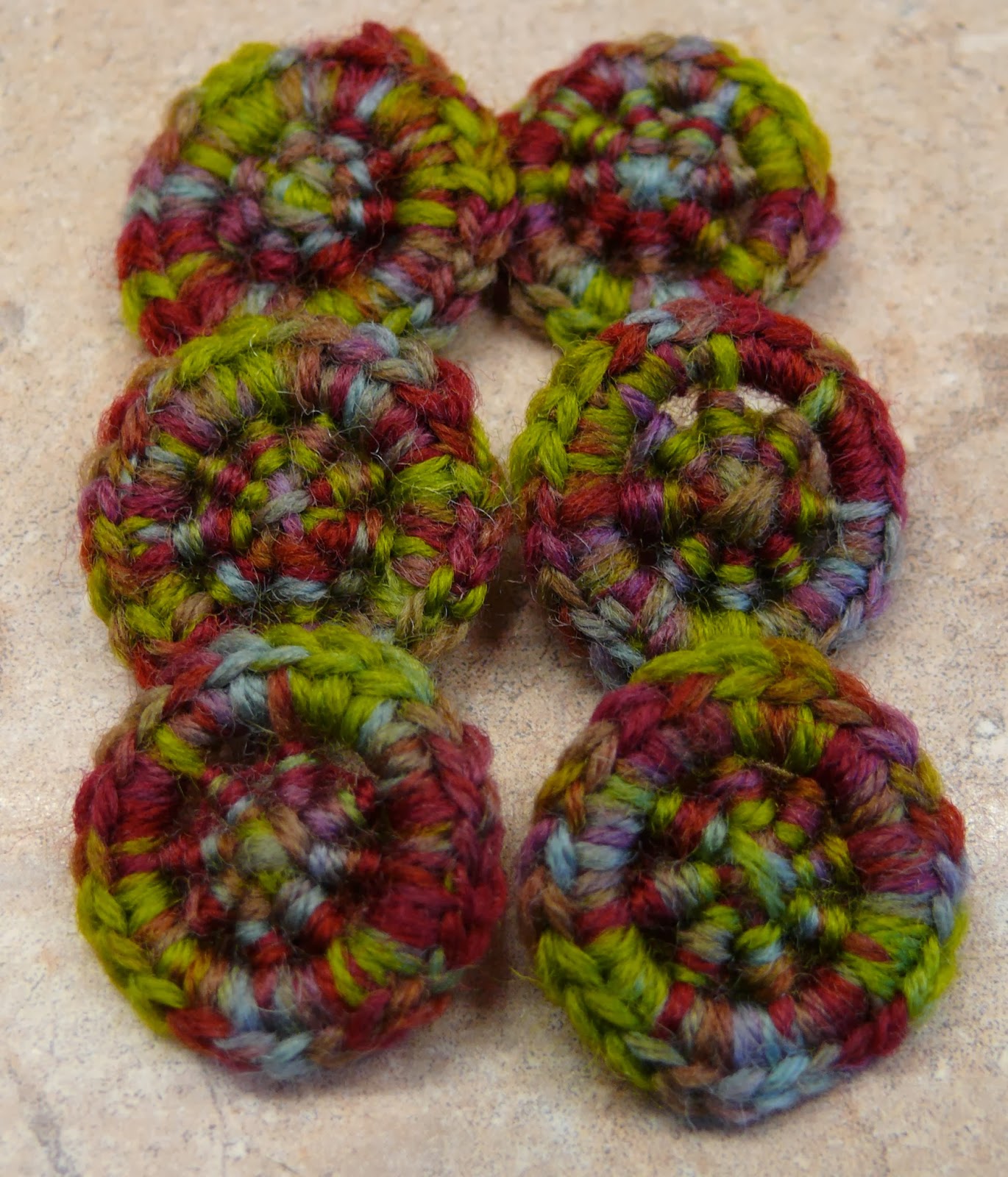 The ones on the left are big so that I could practise the technique. The ones on the right are made on a much smaller scale but still have some glitches if you look carefully.


These are the best yet. 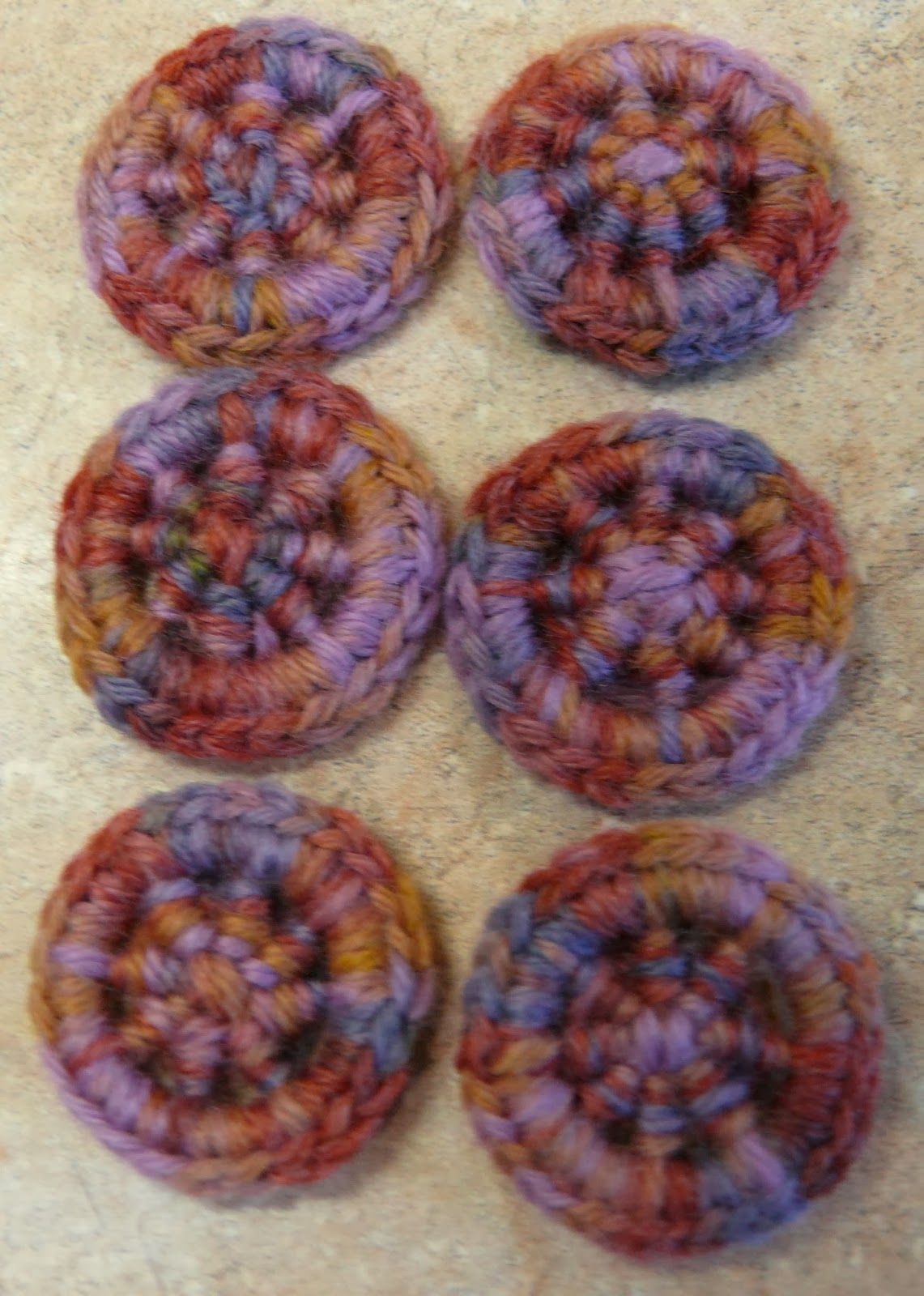 They are all made on a ring, to be honest the two sets of buttons are made on the rings that are used to adjust bra straps. The green and cream ones are  made on a wooden ring from an old necklace and the red one is made on a roman blind ring. The hook size for the best ones was  2.5 mm.
I crocheted around the ring using multicoloured 4ply yarn  ( make sure that the number of double crochets is divisible by 8). The rest is done using a needle. Add 4 threads all the way across the ring using the dc round the edge to help space them evenly. The threads also go around the back too. Then use a needle to weave in and out of the cross threads to give you a pattern in the centre. 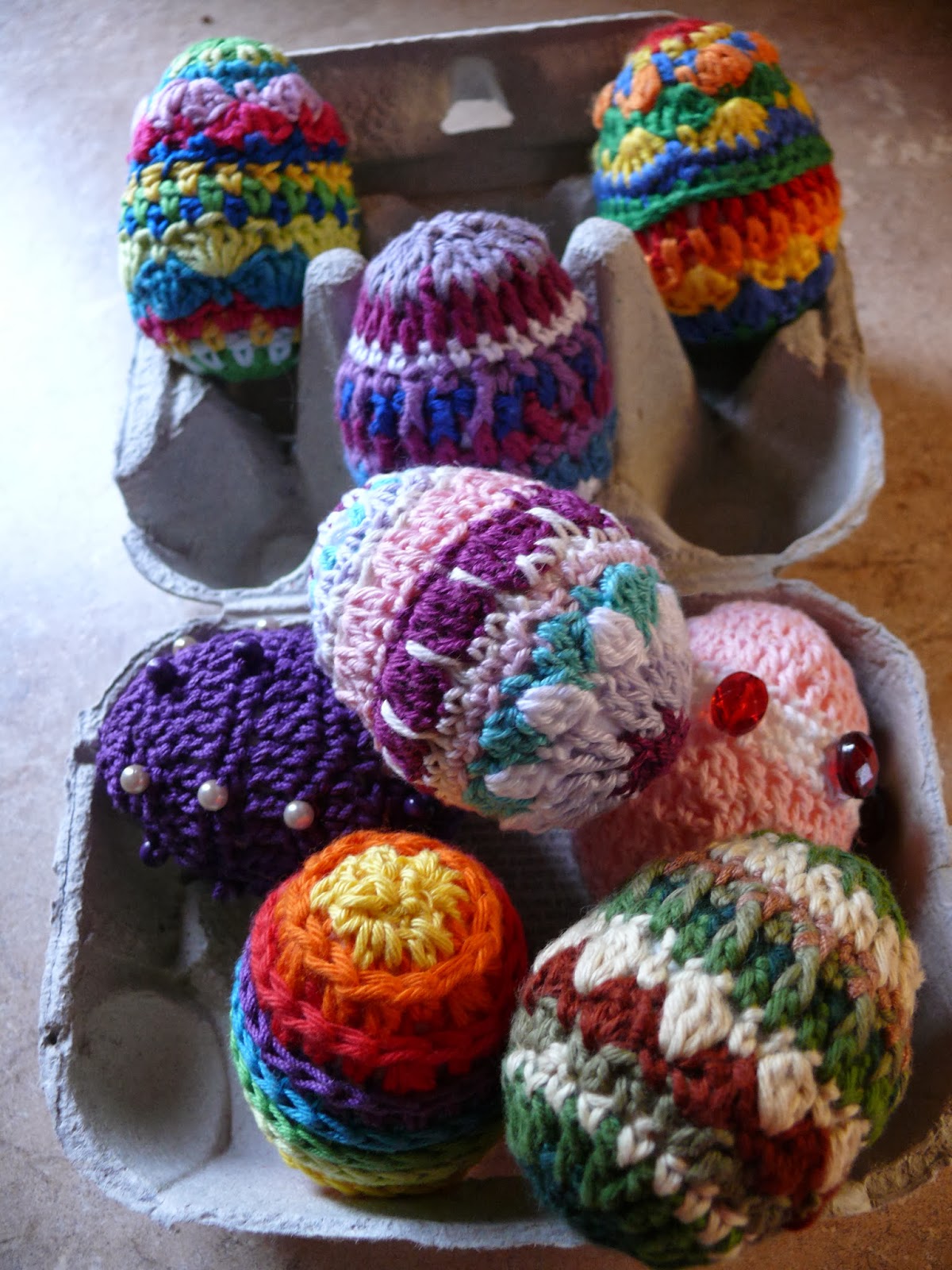 I found some polystyrene eggs in a pound shop 12 for a pound so what could I do but make Easter eggs. Some of them are jeweled in a failed  attempt to make them as beautiful as the famous Faberge eggs. Perhaps not successful but the two I like best are shown below. Ben says I should make a chicken to go with them so that is this afternoons project. 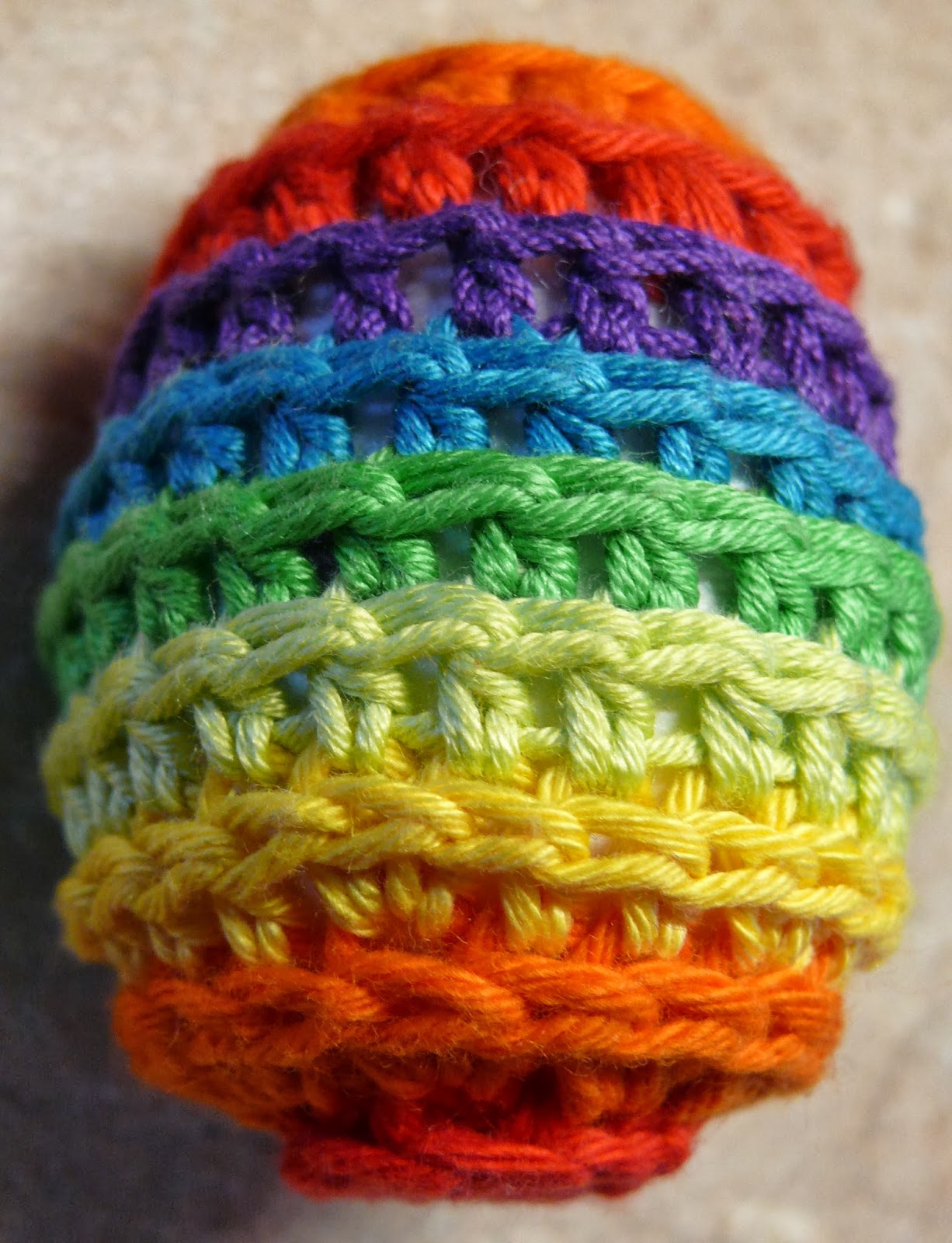 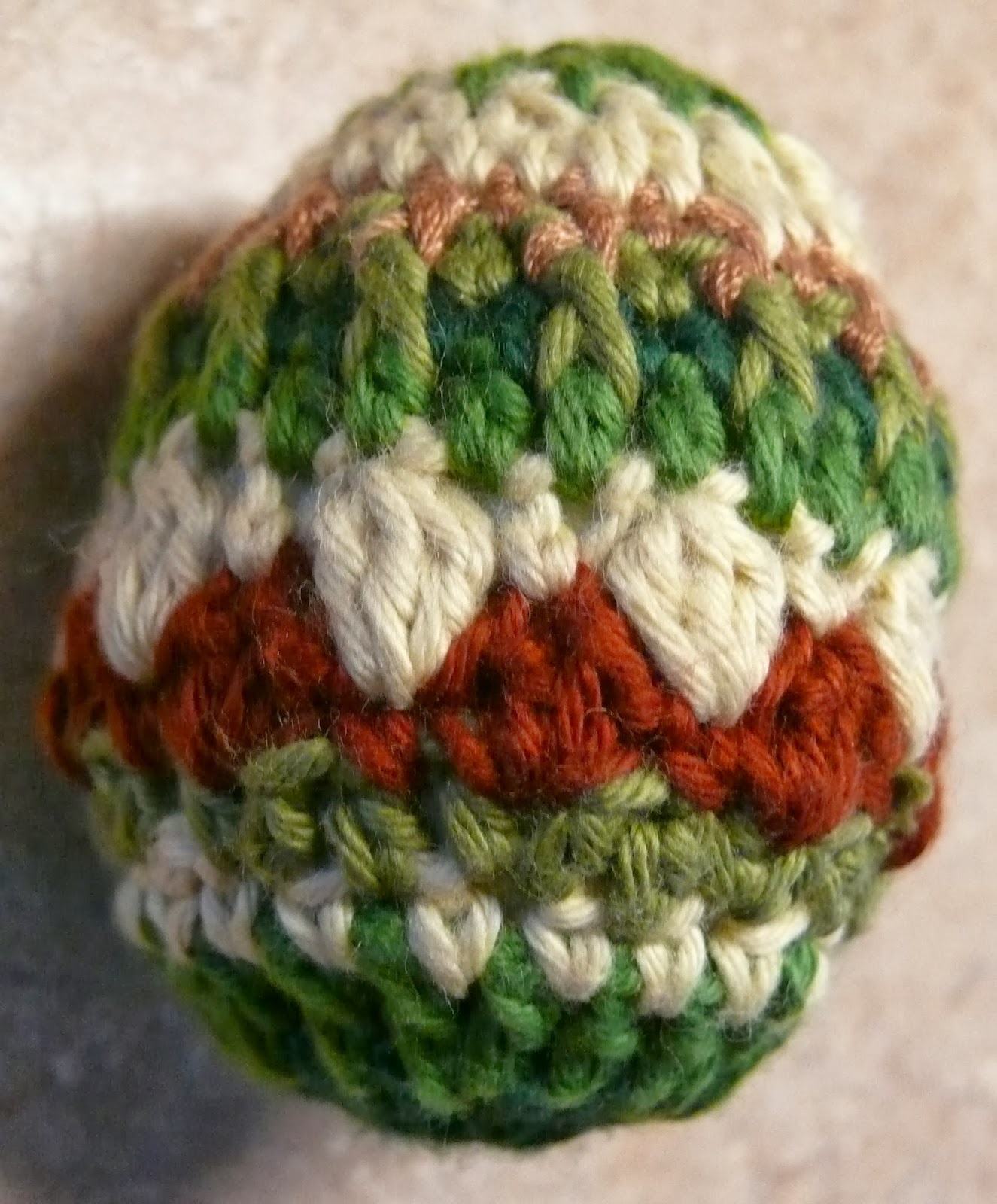 I can give more details about the buttons if any body wants to know but now I am off to create a chicken. This means that we have the answer to which came first - it was definitely the eggs!
Lynn