You have to wonder about two women who are willing to pack woolly objects into boxes and then get up at a ridiculous hour in the morning in order to fill a car with the said woolly objects, together with a gazebo, tables chairs etc, etc. They then take at least two hours to set it all up to sell. Why do we put ourselves through wind, rain, cold and even coffee burns. Why? Simply because of the people we meet. 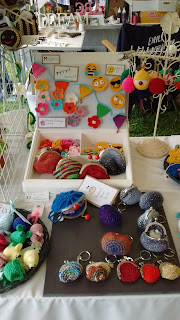 An elderly man who seeks us out to talk about his crochet and to have a sneaky peek at our prices.  His crochet is a protection against loneliness in the evenings.

A little girl who sat on a crochet blanket digging through our fifty pence box, who asks 'Is this all made of knits?'

An amazing 7 year old boy who has taught
himself to crochet from you tube videos. We gave him one of our bunting kits to encourage him

The lovely fellow stall holder who has a business called 'Can't sew won't sew' She bought one of our free form shawls and then wore it as advertising for us. She was inspired to go home and try again to do some crochet.

A kind family who helped me when I spilled hot coffee on myself.

Another child who told us she had been in the carnival parade. She had a beak, wings and a tail but she didn't know what she was supposed to be. 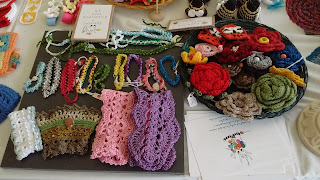 Crochet is something that seems to appeal to girls and we have some that we have to try to put off or they would spend every penny their parents have given them on small crochet objects. Then there is the bigger girl who in spite of being in Hong Kong sent her parents to buy one of our animals to add to her collection.

It is a joy to talk to other crocheters who share ideas and ask knowledgeable questions about what we do.

Lots of people tell us they can't crochet but I suppose mainly we put ourselves through the discomfort of craft selling outdoors because of the overwhelming number of people of all races, gender and age who tell us that our work is beautiful and who just stop to chat about crochet.
Lynn and Victoria
Posted by String Theory Crochet at 10:54