WreathsI , Dream Catchers and A Fish.

In between making the ever popular christmas pudding decorations and chocolate cosies I have found a new fun thing for all you crocheters to try. 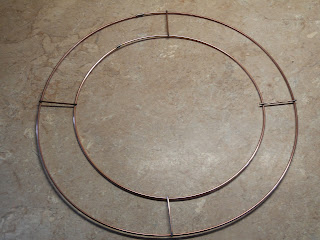 Some of you will know that I have been destroying lampshades ( an unusual super power ) so that I could use their metal rings to make circular decorations but now I have discovered wreath rings. I found them on ebay they are really quite cheap and you can get them in different sizes. These are 10 inches in diameter. First attempt was to wind tarn around the bare metal until it was completely covered. Then I made miles of crocheted mossy leaves which I wrapped around the former before tying on roses made from soft cotton ( red) and ribbon yarn (white). 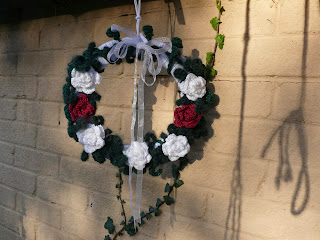 The photograph makes it look a funny shape but it is actually a circle but I do need to redo the bow and cut it shorter. When I took this picture I didn't notice the shadow of a noose, it was a piece of rope tied on the end of a ladder kept on the garage roof - this is the end wall of our garage.

Attempt 2:  I wrapped the ring former in stuffing and tied it in place with yarn before making a cover from really thick yarn and adding some crocheted holly. 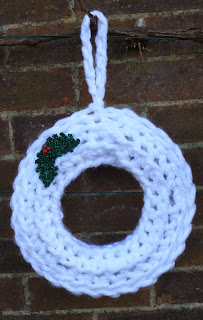 I am about to start attempt 3 using decorations from our 50 pence sale box.

I have also added bells and beads to the stars to turn them into dream catchers. The grapes in this picture have been left for the birds.

Two other things before I get back to crocheting:

A hat not really original,
I saw it on that well known auction site and decided to try my own version. 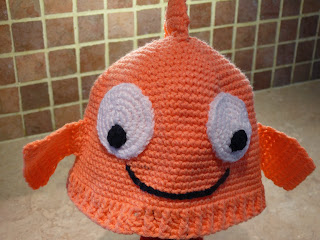 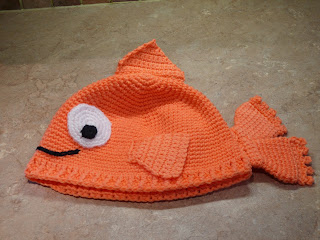 Isn't he friendly looking?
Thing two look here for these beautiful crocheted baubles and much more.

Posted by String Theory Crochet at 15:33