Buttons and Bows and things for Crafters.

I seem to have done lots of crochet but mostly just replacing stock so there is not much that is new to show you. Vicky and I have concluded that the people at shows or those that look at our facebook or Etsy pages are often fellow crafters, So we have tried to include in our range things that crafters need/want. So here are a few of those things: 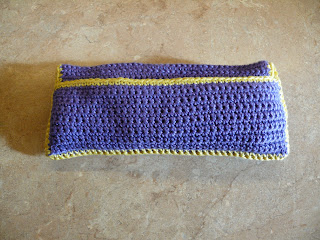 Easy to carry wherever you go 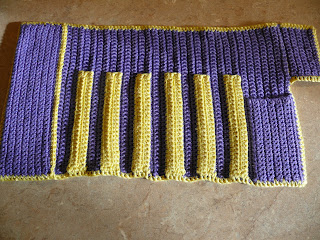 Opened out a plce for your hooks, scissors and needles.

We sell this one with the hooks, scissors and two big eyed needles we can make it for bigger or smaller hooks, for more hooks and in other colours. It has been so popular that I started to dislike making it so we have produced a pattern so that our customers can make their own. 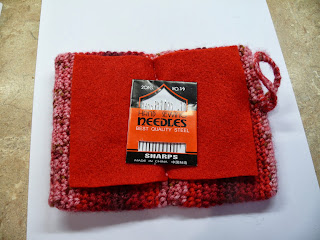 A clever design by Vicky. She has made us both one and they are so useful we thought we should share them with others. The reason they are so good is that you can put normal sewing needles in the felt leaves but you can put blunt yarn needles in the crochet part. The loop goes over a button to keep the needles safe when you are not using them. 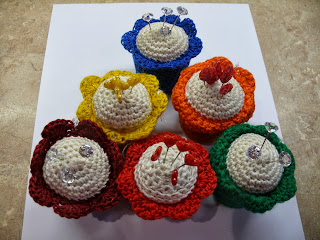 One of the jobs that everybody hates is blocking and pressing work, especially if you have to pin it out first. These little pin cushions and their gorgeous pins will make the job less tedious?

With the success of these few things we have branched out and are trying a limited range of findings or haberdashery. 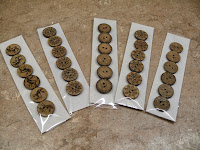 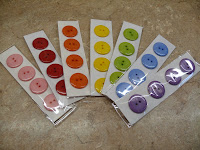 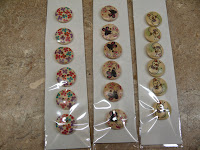 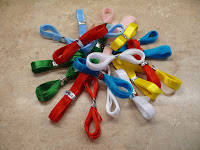 Is there anyone who does not love buttons?

The brown buttons have reindeers and snowflakes and stars on them. The ones under the brightly coloured clown buttons have flowers, rabbits and snowmen. I am very peculiar I know but I love sorting and packaging buttons, probably a hang up from being given my grandmas button box to play with when I was a child.  The ribbons are organza or satin and packed in 2m lengths so you can use them for craft or for wrapping you Christmas presents. 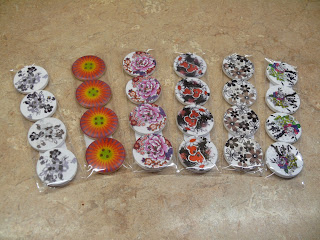 These buttons are 3cm in diameter and they are so lovely that I could easily cover my t-shirts with them - if only you didn't have to sew them on - does anybody out there remember the buttoneer?
Lynn

Posted by String Theory Crochet at 17:29