Spent a lovely day at Henley yesterday. We have only driven through it in the past so we decided to see it close up. Lovely walk down the river; we fed the ducks and the fish and the amazing hovering sea gulls and of course admired/envied the  waterside properties. Then we went up into the town and scoured the antique and book shops. I found two more crochet books for my collection - hooray!

I have done some crocheting 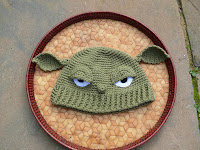 Some observations:
Yoda looks to be more evil than Darth Vader but interestingly when you put the hat on his ears stick out rather better than in the photograph. The pink stocking looks a bit out of place amongst all the Christmassy colours. But beleive me the pink one will sell! Vicky is putting our Christmas things on Etsy so I tried to take a better picture of the stockings. Which is why they are here again. 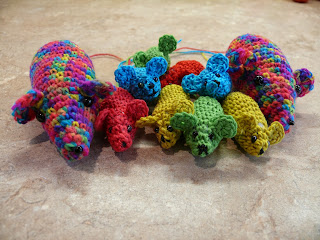 I spend a lot of time making these for craft fairs all through the year. We sell them in sets made up of one multi-coloured mummy mouse and four babies made in colours to match one of the colours in the mummies coat, (genetics you know). It is hard to see in the photograph but each mouse seems to have a different expression all achieved by sewing the ears or the bead eyes in a slightly different place.

Finally I have made some sparkly flowers using twilleys goldfingering in red. then green leaves using 4ply green acrylic together with a strand of green shiny yarn ( this is considerably cheaper tham buying sparkly yarn and just as effective I think). Finally I have added a snowman button. As I sewed this button on I also sewed around the hair band, thus holding the flower in place. Later I glued the flower to the head band. I know this is probably blindingly obvious but if you put the glue on the head band and slide the flower into the glue you make a lot less mess. See it is never too late to learn.

I am calling these flowers pointlesssettia it has nothing to do with the popular television quiz ( which I love) but to do with the shape of the petals (I know brachts).
Lynn
Posted by String Theory Crochet at 14:46