the tools of the trade

I have mentioned before that I have a stash of yarn or a hoard as I prefer to call it but I have never admitted my other guilty secret, that is I also have a stash of crochet hooks! Today I made the brave decision to get rid of some of them by selling on ebay. As I was doing this it occured to me that we spend a lot of time looking at and talking about the finished crochet pieces but never about the tools of our trade. 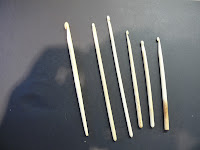 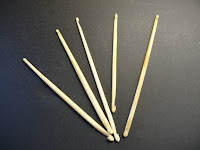 Crochet hooks have been made of practically anything that is available where you live. So Robin Hood probably made hooks for Maid Marion out of wood whereas Nanuk of the north probably used fish bones or whale teeth or walrus  ivory for Mrs. Nanuk. The oldest ones I have are made from ox bone. The ones on the left are single ended and those on the right are double ended. What I like is the brown patina that is the result of use - I wonder what they made and who it was that used it. 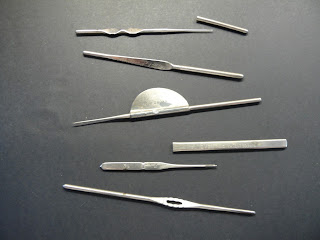 These are all steel with different ways of making a grip. What I don't understand is why the one with a flap says 'Vicars Motors Cro Hook' on it. 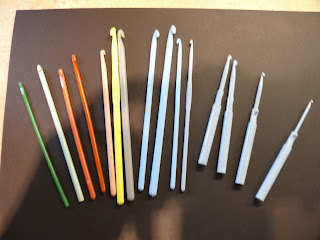 Then there is plastic which is so cheap that some of these were just given away with magazines. Like the 4 little ones on the right, they are designed to fit into one another and were given away with one of my mothers magazines. 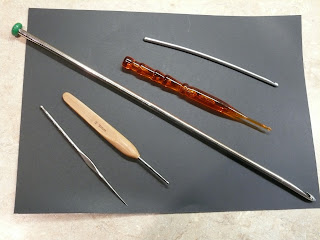 The reasons for showing you these: bottom one is so fine I can barely see that there is a hook on the end and yet it has been used so much that the pattern is nearly worn away - I wonder who did so much fine work? The one with the wooden handle is my current favourite type of hook. The orange one is plastic but someone has really tried to design a beautiful tool. The one at the top is aluminium and look how bent it has become with use. The long one in the middle is the one I am using to do my Tunisian crochet but it has a secret------- 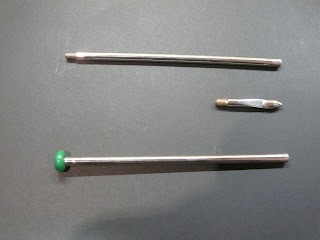 It unscrews into three bits so you can change its length according to what you are doing. I have never seen one like this before but I do like its design.
Some of the modern hooks are truly amazing, especially those that are made to protect you from repetitative strain injury and those that give you a complete tool kit with only one handle.

I suppose this is another indication of my science background I am amazed at the clever use of materials and the thought and ingenuity behind some of the designs but most of all I like to think about the people who may have used these crochet hooks. Of course if they sell I will be able to think of what happens next.

If I am ever cast away on a desert island I will be able to make crochet hooks from cocoa nut shells, spin yarn from plant fibres and then crochet myself a three bedroom detached bungalow - well may be a tent and some blankets.
Lynn

p.s. Vicky has an even bigger collection of hooks than me so this saga could be extended!

Yes mother - thanks for outing me!  Hello everyone.  My name is Victoria and I am a hook addict ...
Posted by String Theory Crochet at 20:56